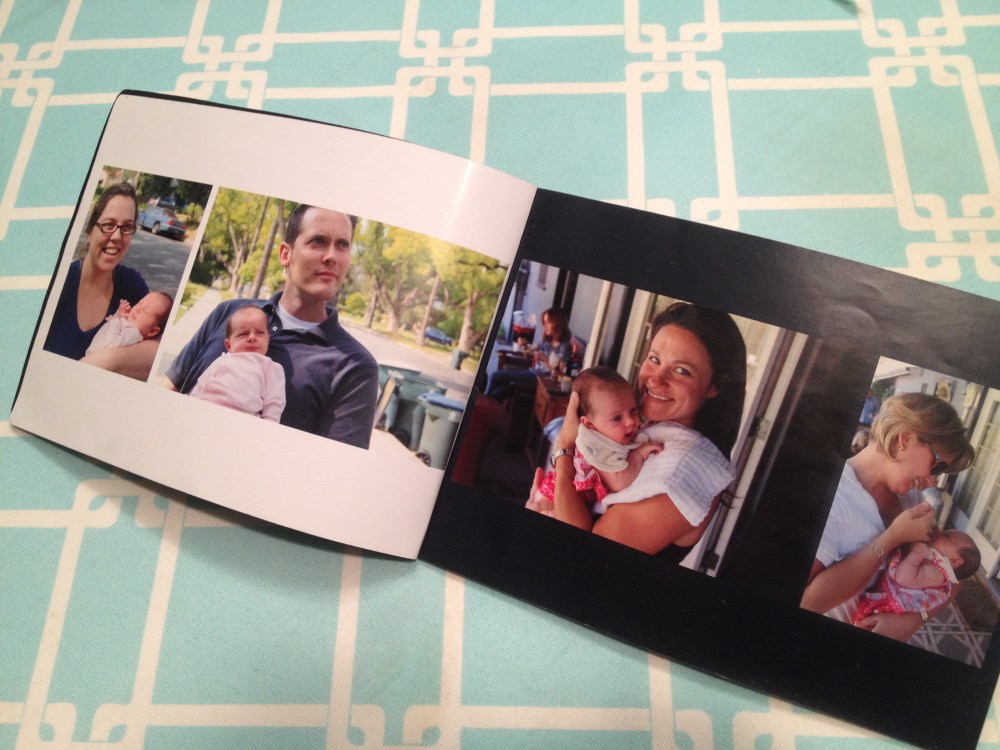 This was a simple unit that I spread out over the month, but probably would have taken a week or so if I’d done an activity each day.

1. Looked through family picture albums together.
When I pointed out her great-grandfather whom she never got the chance to meet,  I told her his name was “Fa” (a nickname that stuck after the first grandkid said it).  She said, “Fa…a long long way to run.”  And ran around the couch. 🙂  Kids are cute.

2. Painting
When she was painting, I asked her to “draw” pictures of members of our family.  I did them in groups: cousins, aunts, uncles, etc. Most were lines or circles.  I meant to take a picture, but forgot…I forgot a lot of pictures for this unit if you didn’t notice.  Oops!

3. Found pictures of the people she’s named after so she could see who they were.

4. Photo Book
I had printed a photo book of family members (see picture at top of page) with her from birth up to a year.  It was for using to keep her quiet at church services when she was younger.  We went through it and named everyone and talked about how she was a baby.

By the way, I ordered it online from Walmart and depending on how many pages you put in, it’s pretty cheap.  I think I paid about $8 for it.

5. Baby book and videos
We went through her baby book and watched some videos of when she was a baby.

She has a cork board in her room, so I put up pictures of our family members.

Knock, Knock Family App by Curio Makers LLC
(The great thing is, you can choose a picture of anyone on your phone or ipad and add your own family members!  And then you can even record them saying hi.  I didn’t notice this feature until weeks later. I did it with her picture and voice, but that would have been great to get family to say hi and put them in there for her. )

Celebrate Family! (I like this one except for the Kai-Lan episode.  I’m trying to avoid plot based cartoons since they tend to put forward a lot of crazy ideas.  Her brain isn’t developed enough to understand that what the characters are doing wrong for the 20 min is wrong and to wait for those last five minutes of resolution to really learn what she should do.  So, I’ve been trying to avoid them for as long as possible.  So far she’s still entertained with the simple stuff.

The Kai-Lan episode involves a kid getting mad.  We made sure she didn’t watch it alone and haven’t watched it since. But for a few days after watching it, she did talk about why she was mad about certain things and acted mad, even though she really wasn’t.  Fortunately, she stopped doing that.)

Learn Names of Family Members by Learn Chinese with Emma!

Lesson Learned: Try to “play” and watch shows and apps ahead of time so that I can use them (or not) more effectively.  And have the phone camera ready at all times — really wish I’d gotten her reaction to Fa’s name. 🙂

Part of a series of themes and unit, find the whole list here.