The book is a high 4th/low 5th grade reading level and would interest kids 3-10ish.

There are two more books in the series.  We did not read them, but plan to in the future:
Little Pear and the Rabbits
More About Little Pear

The author, Eleanor Lattimore, actually wrote tons of books!! And they all look great!  Many are out of print.  I found a few at my local libraries and some reasonably priced on Amazon — lots crazy expensive too!

So, as per our book club, when we finished the book, we had a get together to celebrate finishing and to explore the book more.  It was so much fun to plan and watch the kids.  Later in the evening, a parent sent me a note that her 5 year old son said, “It’s like we jumped right into the book!”  Which is my goal with these get togethers. 🙂

My husband is so great at chalk art!! As they walked up to the gate, I posted some Chinese words they could use at the party. I also posted the names of the Chinese dynasties and Chinese inventions. I decorated the gate and set up the passports, name tags and bags. 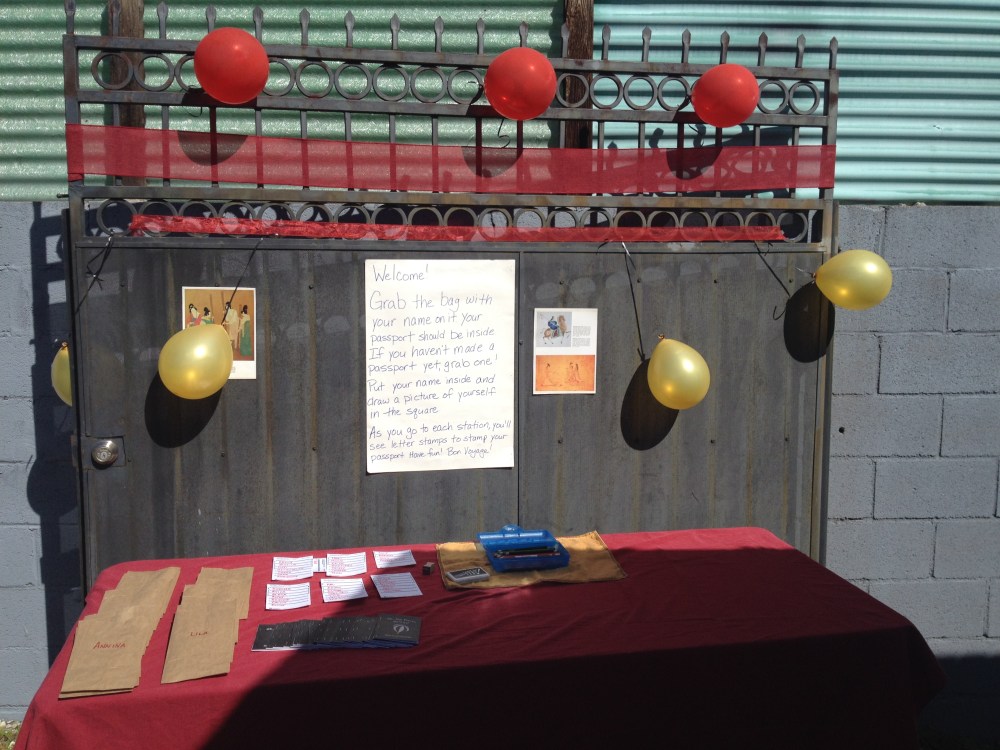 Here’s one of our 3 year old’s stamping “Shegu, China” into his passport.  🙂  I was surprised to learn that Shegu, China is an actual place.  Looking at satellite pictures of it, we were able to see things like the river and the fields.  It was great!  I’ve linked to the maps we looked at on my Pinterest board.

Missing from the picture of the welcome table above is the set up of the Chinese coins for the kids to make their own string of Chinese coins.  They could keep them or use them at the party — one coin for a plate of food at the “restaurant,” one coin for a toy at the “toy shop,” and two coins to make their own shuttlecock.  But, it was completely up to the kids what they wanted to do. 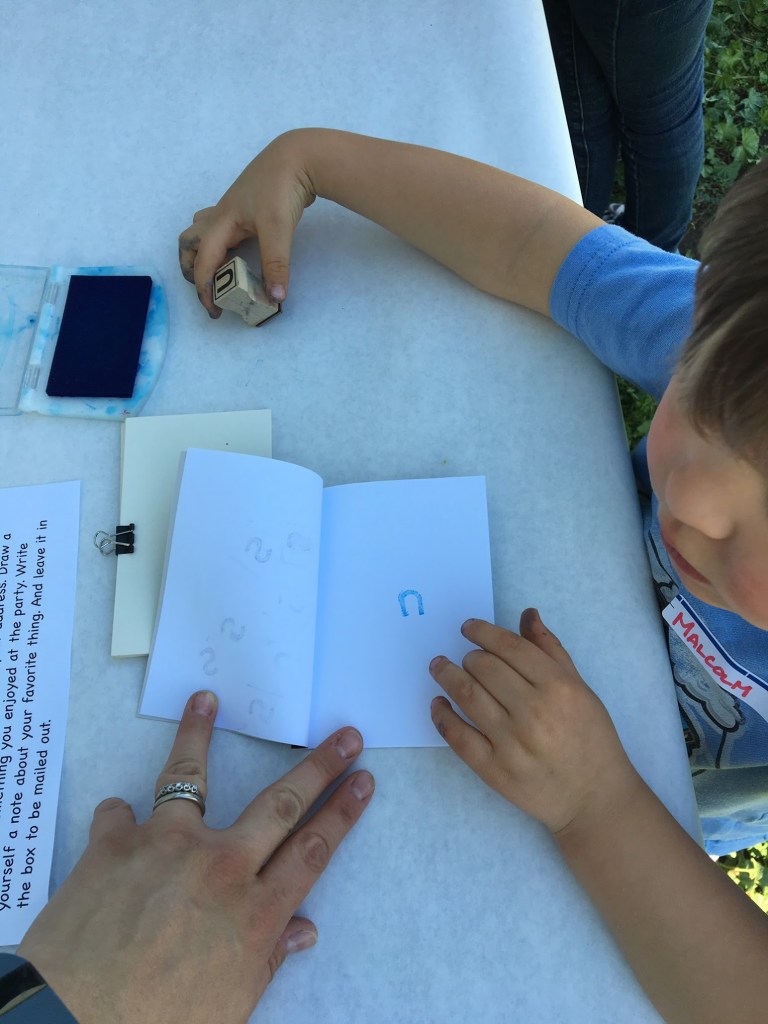 After some research, I figured out that the river next to Shegu is the Chengtan River.  On the wall they walked past to get to my backyard, I drew waves and wrote Chengtan River. I also wrote it in Chinese (that was a fun experience!).

I posted some  pictures of boats they mentioned (junk, houseboat, sailboat).  I googled images from China though, so not just any sailboat.  I also posted a couple pictures of the river itself.  I’ll try and remember to keep my sources so I can site them and share them with you, but I didn’t this time, so I don’t want to infringe on any copyright issues.

At the end of the “river,” I asked the kids to draw in their own boats.  It turned out really cute! 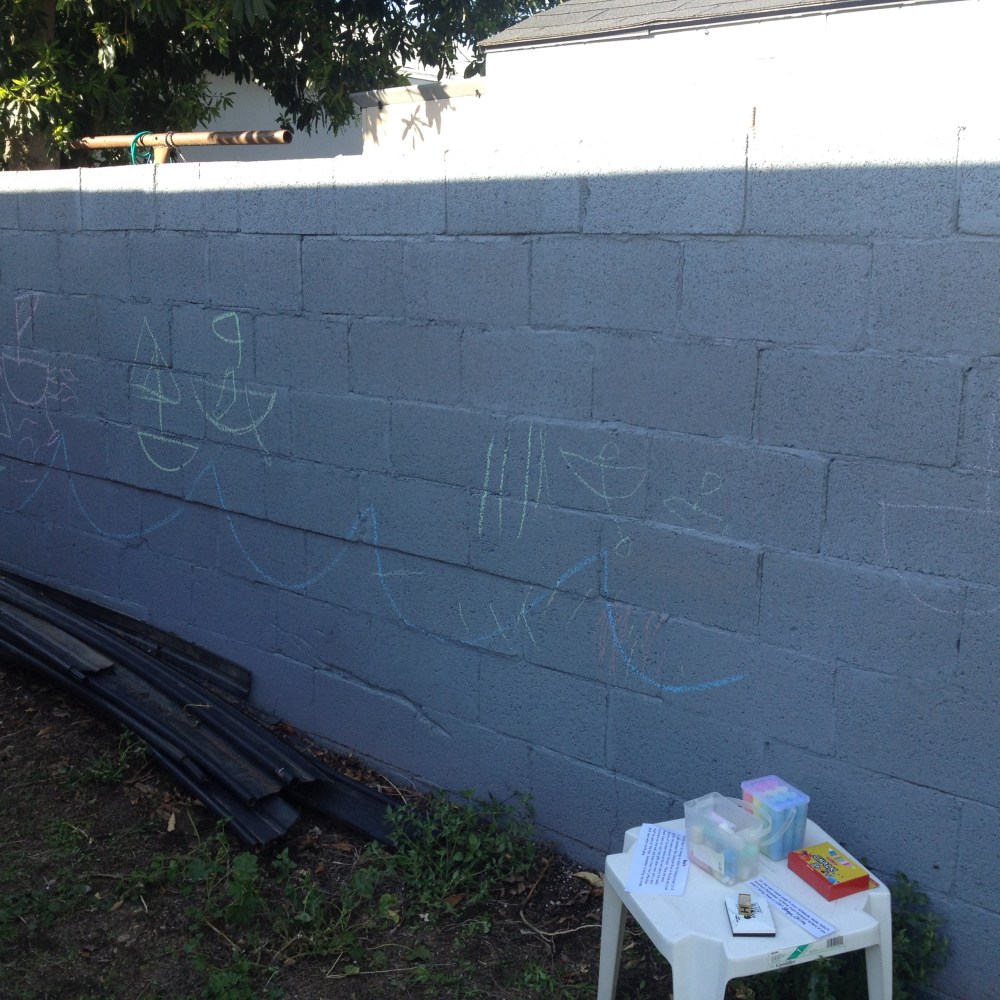 I set up stations all over the yard, as well as Chinese words.  I hung green streamers on two of the trees to be weeping willows.

And on one of the trees, I hung up some green peaches I had cut out of construction paper. 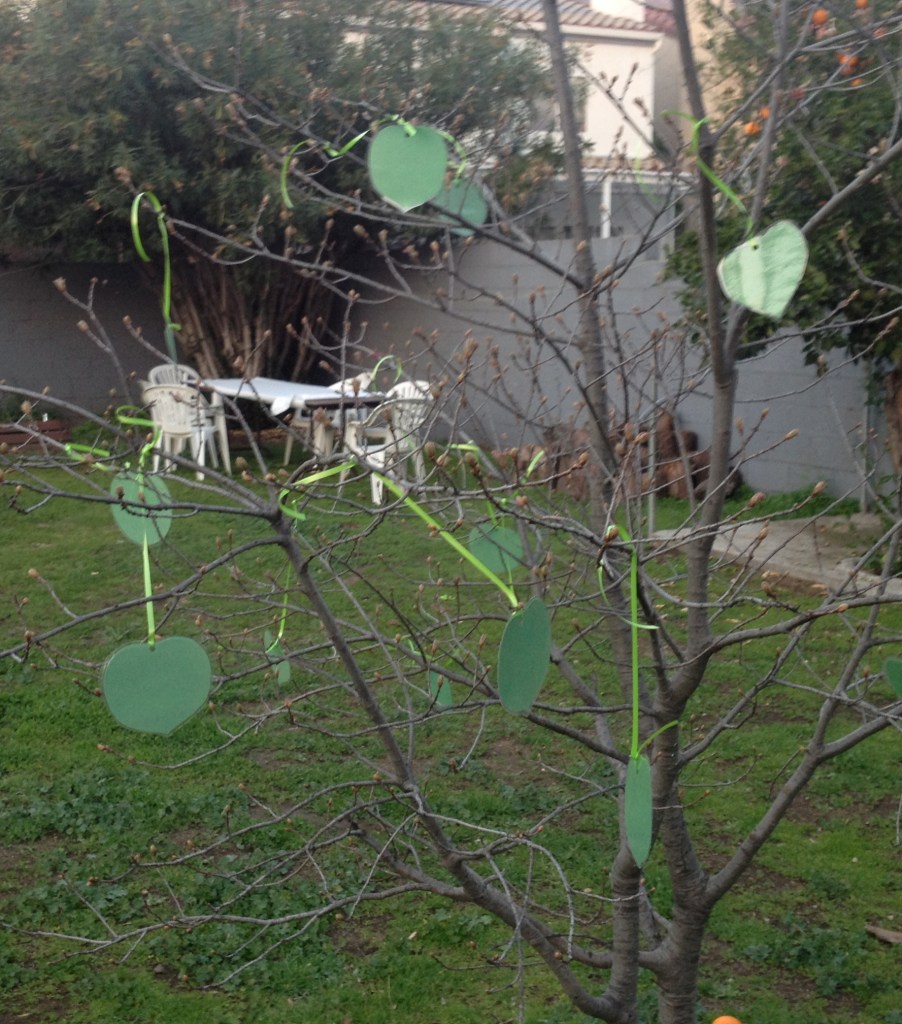 This was the “restaurant.”  They used one of their coins to buy a plate. I put out chopsticks, along with spoons and forks.  There were dumplings, vegetable rolls, and rice.  I also included a couple things I bought when we visited Chinatown.  We had gotten chrysanthemum tea and mung noodles.  I just cooked the mung noodles in a broth and cracked a couple eggs in too, so it was similar to the soup mentioned in the book. 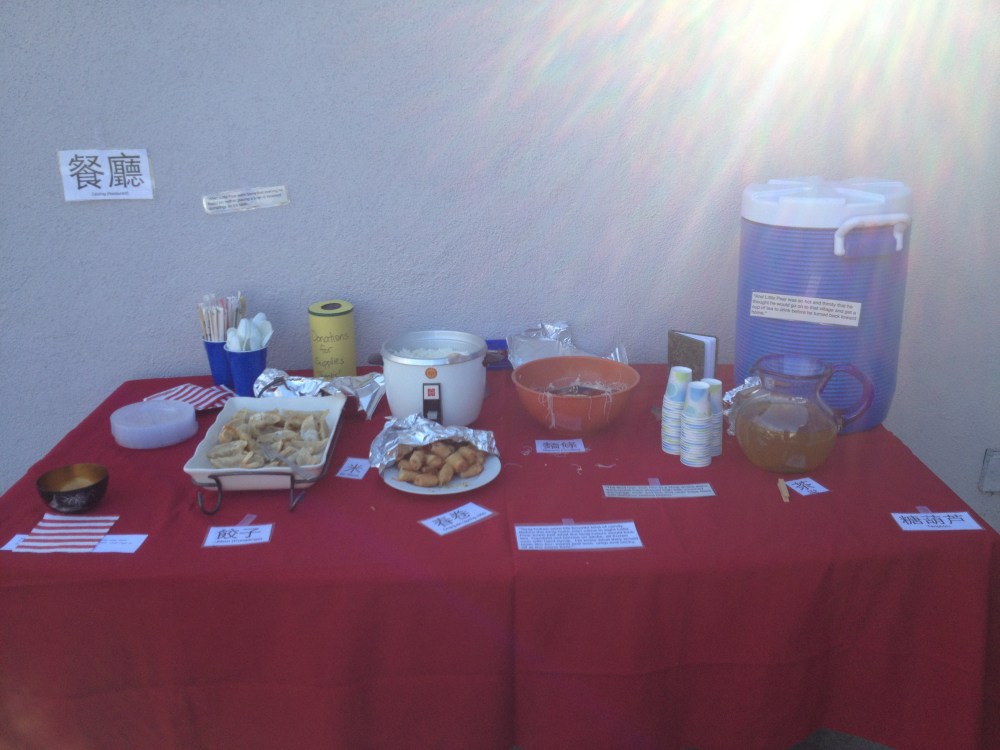 So, five pounds of onions don’t really fill up much of a wheelbarrow!  I meant to make some out of construction paper, but I just ran out of time.  But, I did have two big cabbages in the garden that I had two kids go pull up.  It added a very cool element of authenticity.  They enjoyed riding in a wheelbarrow. 🙂 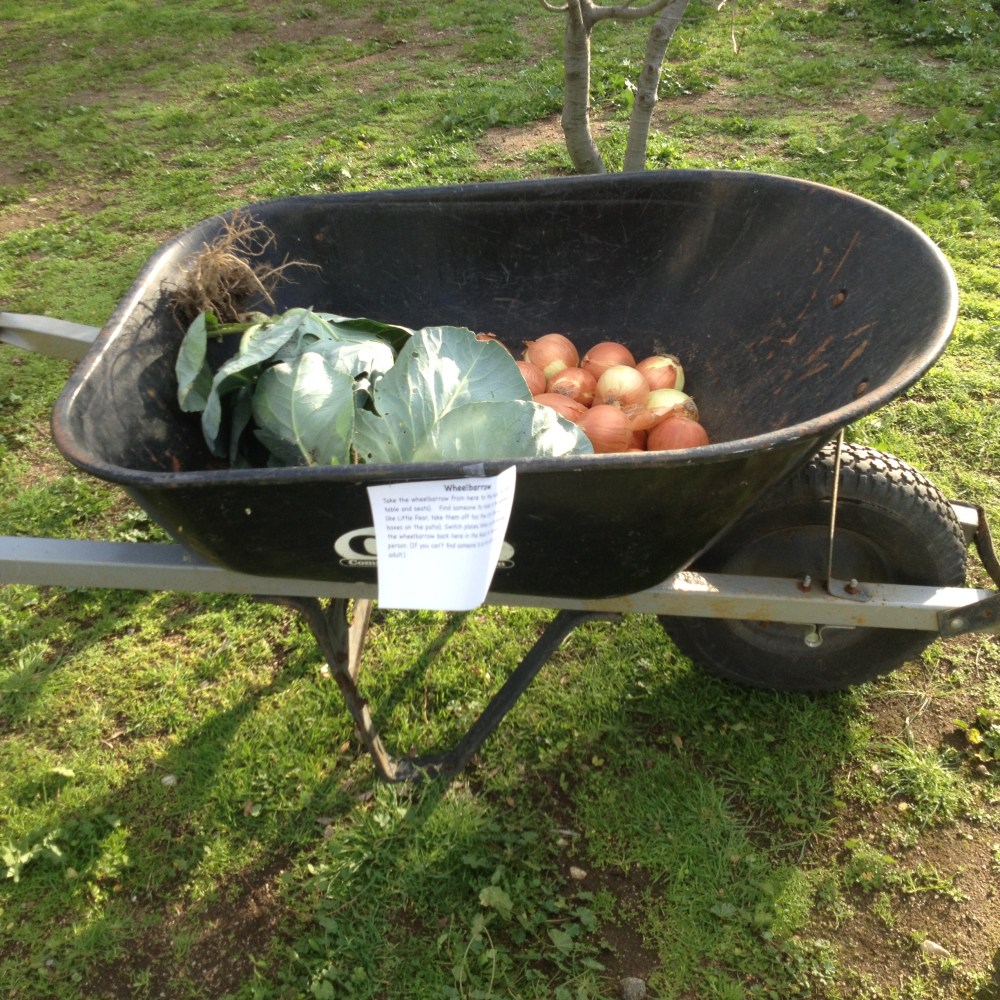 Trying to use chopsticks — and then racing to see how many they could put into the bowl. 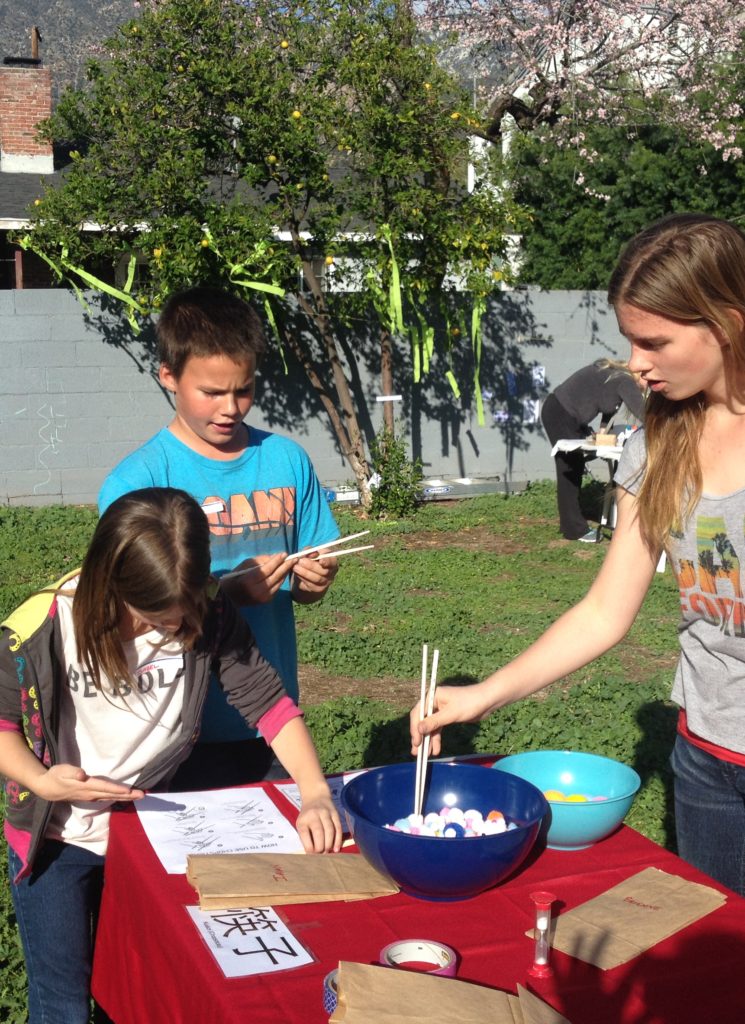 The Great Wall of China — I had set this up for the little babies to play in, but the kids decided to make it. 🙂  I included two sheets, directions on how to use chopsticks and chopstick ettiquette. 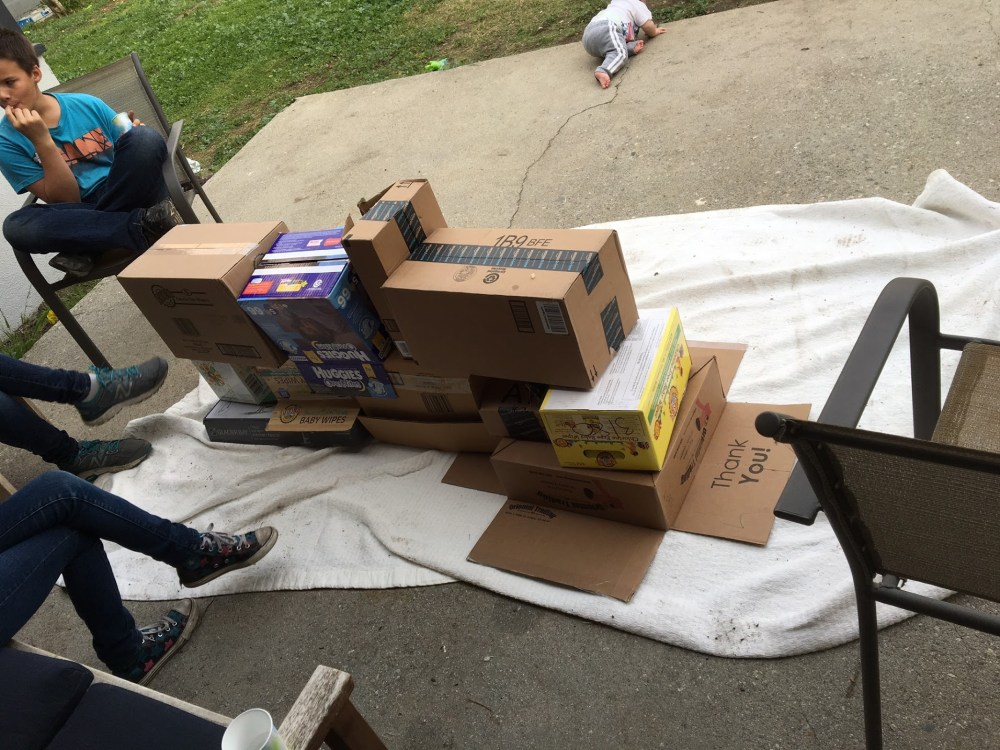 Creating a river to race stick boats in. 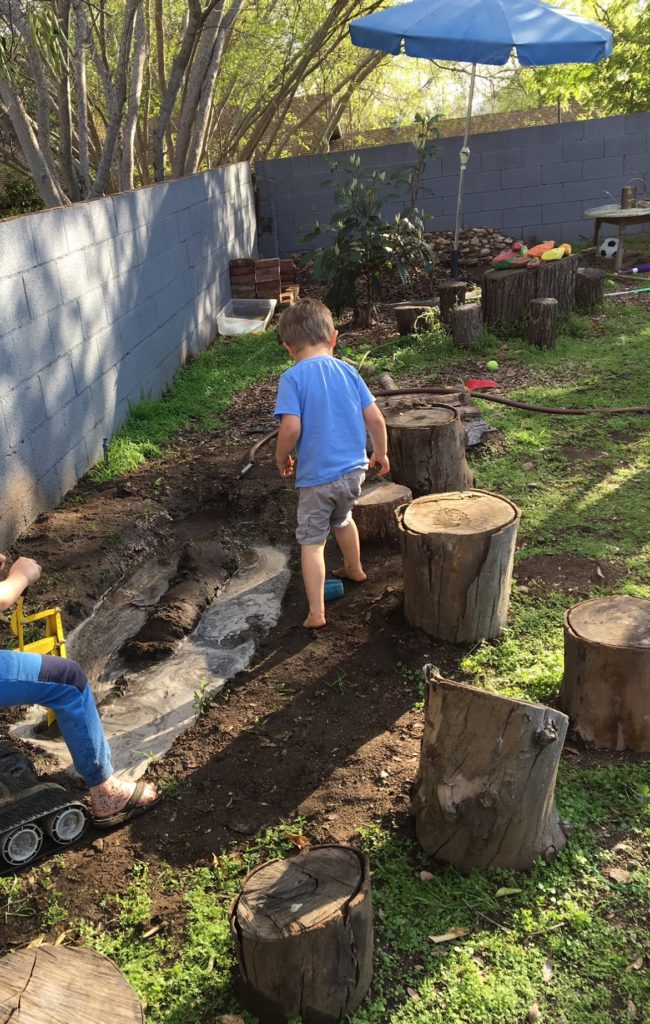 Writing their names in Chinese was fun! I used a Chinesetools website to print out everyone’s name.

We also made birds.  Well, the kids did.  The directions said make a yellow bird, and I put out tons of yellow, brown and orange craft supplies, tape, scissors, glue, and googly eyes.  I didn’t put out an example or anything, because I wanted them to be creative and not try to copy me.  I also didn’t put an example out, because I was unwilling to try and figure out how to make a bird with all that stuff. 😉 My daughter’s first round of things had made a super cute bird.  Then she did a second, third and fourth layer!  For something made of pretty light items, it was heavy from all the glue!! It took all day to dry. 🙂 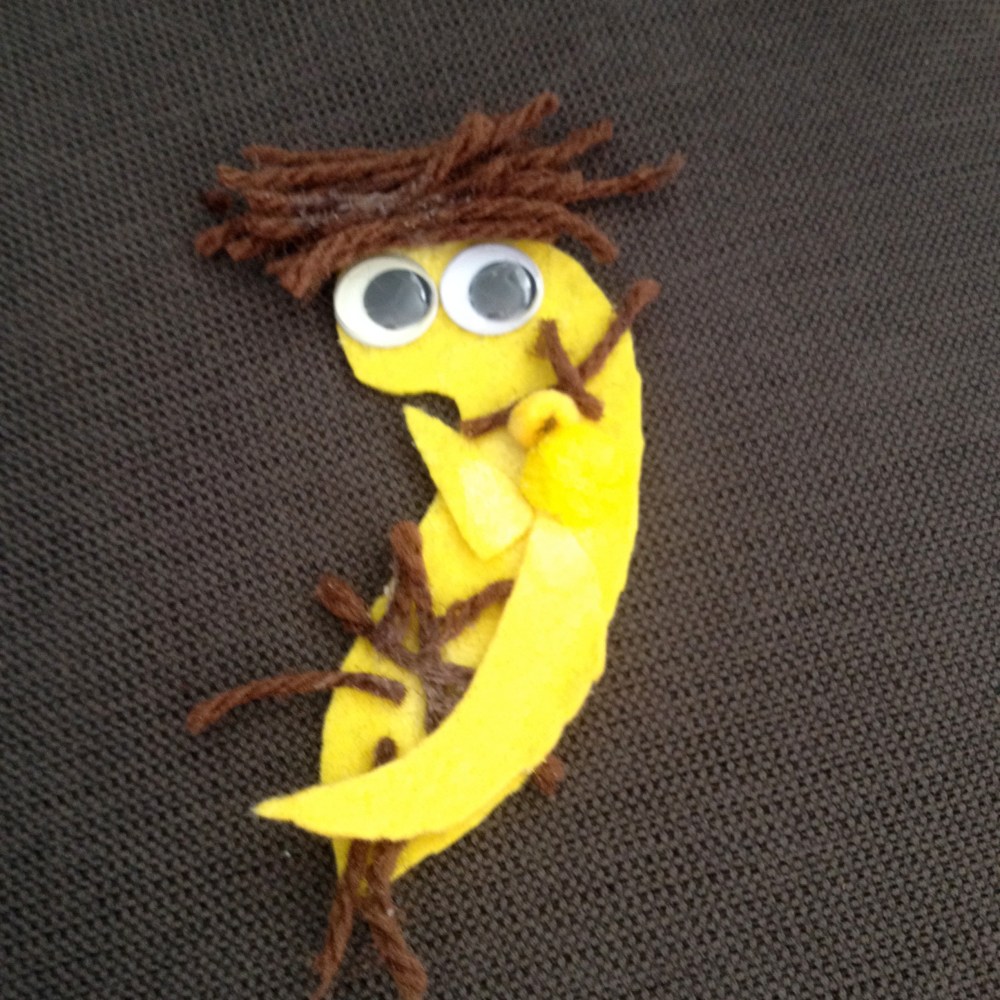 The “toy shop” is under the canopy.  It was really one table that was a toy shop and the rest were toys and games to make and/or try out. The chairs off to the left of the canopy were set up with a Chinese jump rope.  Remember those?! 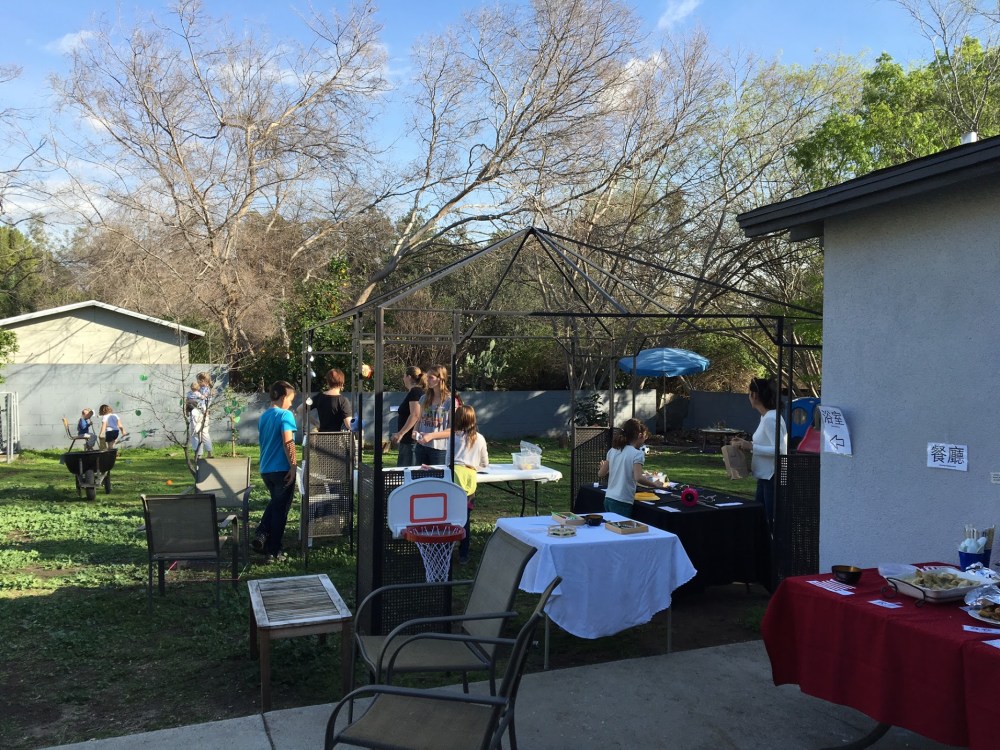 Where they could use another coin to buy a toy.  I bought Chinese yo-yos (I linked to some, but I found mine in the party section of the dollar store.), Chinese finger traps and tops (they were mentioned in the book — and were authentic, since they were made in China. 😉 ) 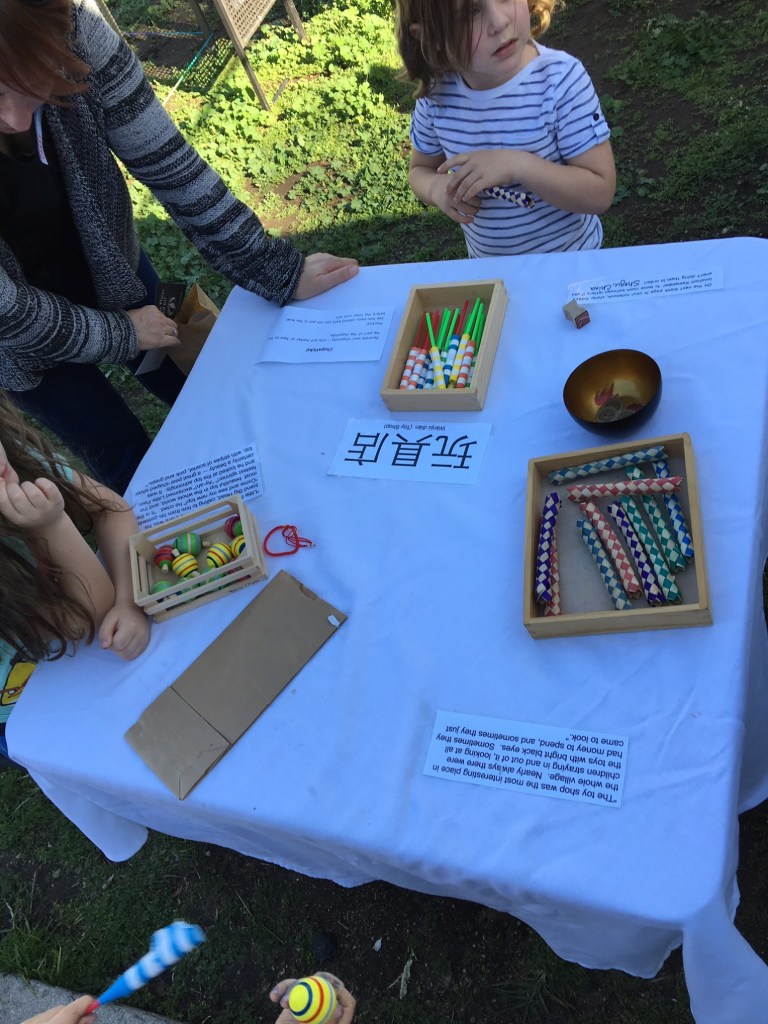 This is a homemade shuttlecock!  Here’s the instructional video I watched that seemed like the easiest way to do it. I also got a spinning plate and a diabolo from Amazon.  The kids were excited to see these! Most were not very successful at them, but had fun trying! (I found out that the western term for diabolo is Chinese yo-yo, not to be confused with the other paper Chinese yo-yos.  Then I found out that an actual diabolo is a little different, but I’d already ordered this one — and, if memory serves, the other one was way more expensive.) 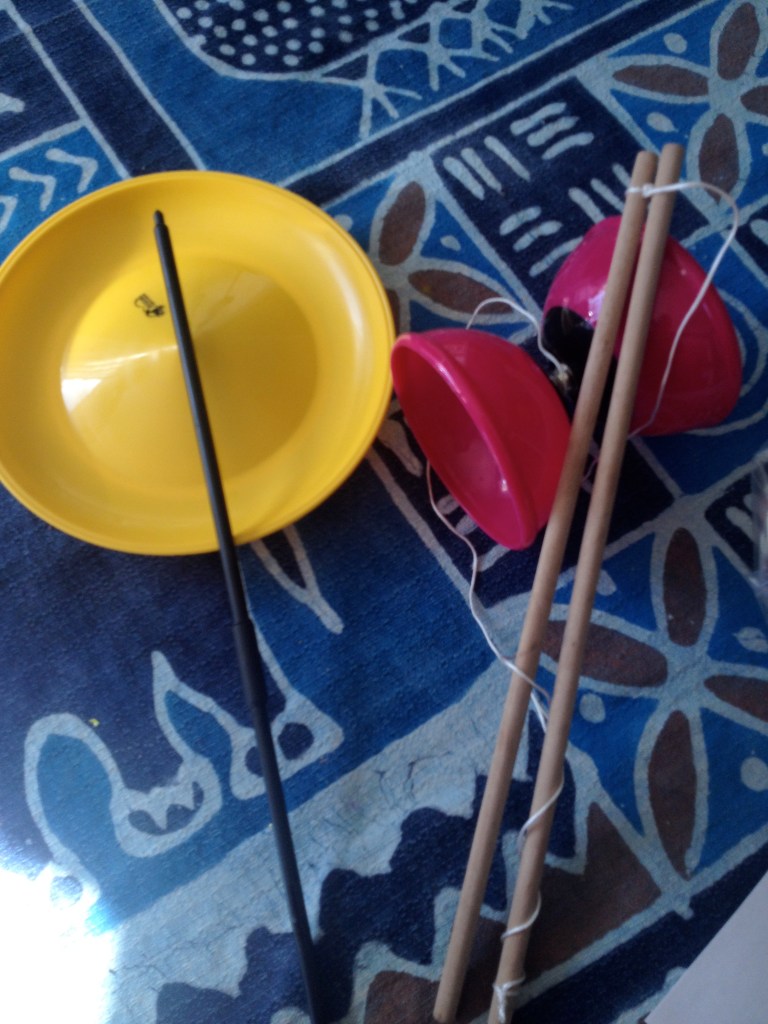 The kids did some watercolors. 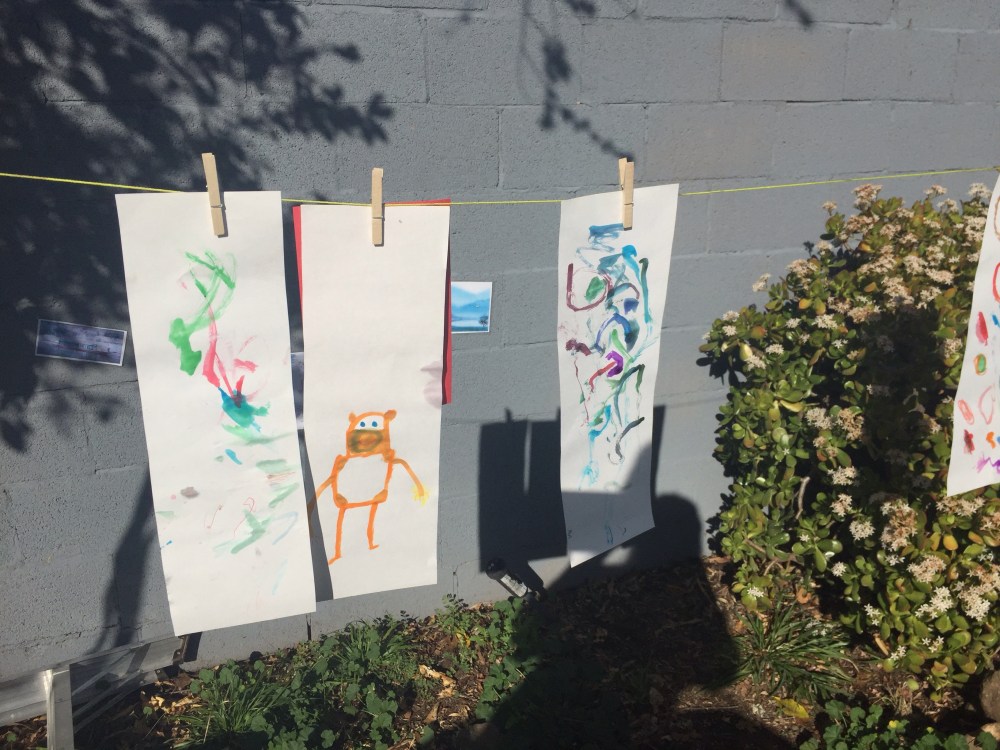 The original fruit used were hawthorn berries, but they don’t sell them fresh here. (I did get some dried ones in Chinatown–although mine looked a little different than the ones on Amazon–They were definitely something I’d never tasted before.)  Many fruits are used these days, but I wanted to keep them red and a little strange.  Hawthorne berries are described as kind of sour.  So, rather than pick strawberries, which would be just sweet and wouldn’t have that exotic/sour flavor aspect, I picked cherry tomatoes (which are also used in tang hulu stands in China).

These were delicious!!  I watched a few videos on how to do this.  Basically, the candy coating is 2 (sugar) to 1 (water).  Boil it until it’s bubbly and just starting to yellow.  Then dip the fruit in.  I found the toothpicks a little tricky, because they were so short, but I only burned my fingers a couple times. 😉

I also found that if the liquid dripped off the fruit, it wasn’t hot enough.  It basically went on and then hardened immediately.  My only problem was that I was making so many that the sugar started to burn, so I had to throw out half of one of the sugar batches and make another. I made these the night before and kept them in the fridge. 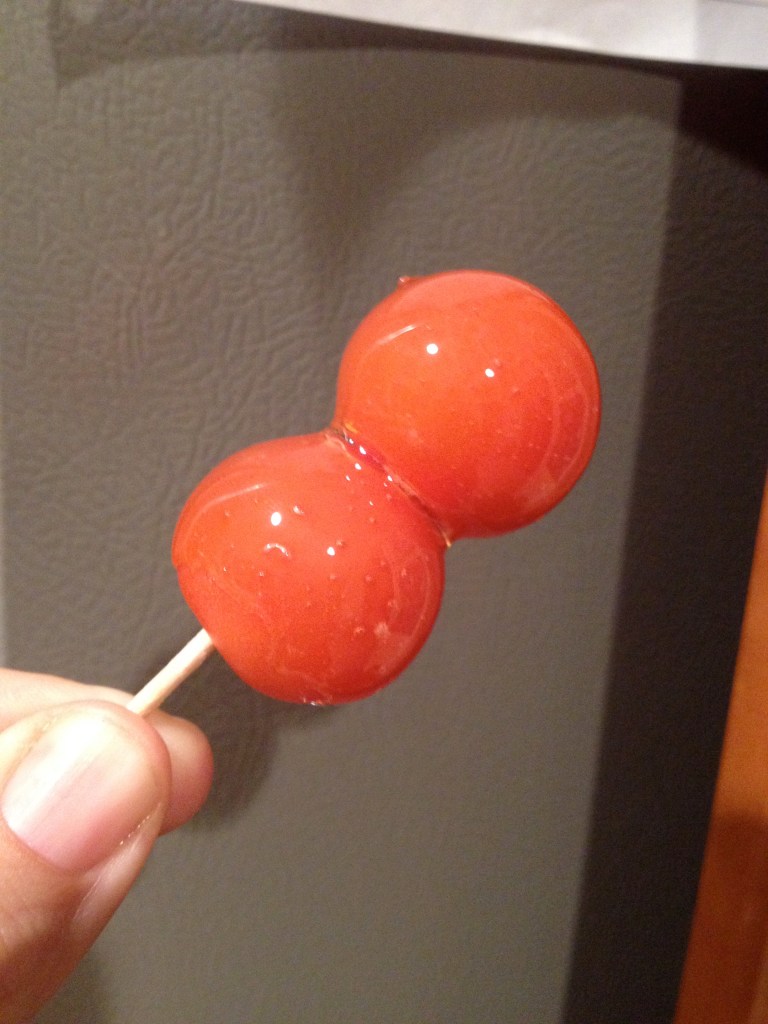 My daughter, when she knew we were making these asked if she could go around and say “Tang Hulurs! Tang Hulurs!” like the man in the book.  When the time came for her to do so, she hesitated a little bit, but then went off.  I’m so sad I didn’t get video.  It was really cute! 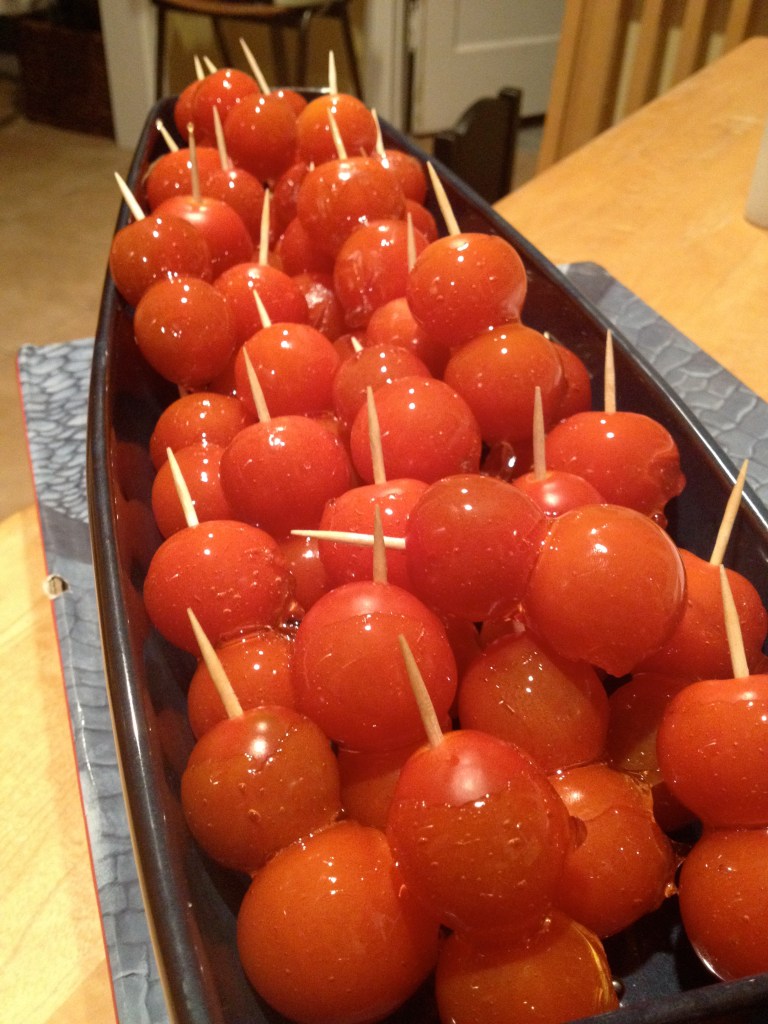 Right after that time, we also handed out some sparklers we got in Chinatown (it was right around Chinese New Year, so there were plenty.  I don’t know if they always sell them.)  That was fun.  The kids loved them, of course.

I then gave them some snaps.  They are those things that you throw down and they make a pop sound, so there was an element of the fireworks noises.  That was fun and loud.  (Amazon does sell sparklers and the snaps, but they were definitely cheaper in Chinatown.)

Not pictured, but listed in the directions: stuffed lions next to the entrance, map activity, flag activity, brick oven in the mud kitchen, ice fishing, small drum

GOOD NEWS!! I finally figured out how to download a file!!! Yay!  Which means, I don’t have to write out all the directions, like I did with the Alice’s Adventures in Wonderland and The Boxcar Children posts.  Hopefully, I’ll someday go back and simplify it.  So, at the bottom of the page, you’ll find files to print out the directions for each station, quotes I put up and Chinese words I put around.

To see what inspired some of my ideas and more ideas you might want to try, see my Book Theme: Little Pear Pinterest Board
Study: China Pinterest Board