We initially were going for Tuesday the twenty-first at ten. But, then decided to have it while we had some Chinese foreign exchange students over.  So, it turned into a party for the kids followed with dinner for the adults on Tuesday the twenty-eighth at three thirty. So, we ended up with 8 children ages 2 1/2 to 12 and 10 adults.  It was awesome!

The day before, we set up the tables in T formations, of course. And, I used a highlighter to write all the labels for things, and my daughter traced over the highlighter.

The Invitation (which I meant to get a picture of, but didn’t, ugh!):

Card stock shaped like a large T that could be folded down the center.  My daughter stamped T’s all over one side of it.  I told them the date, time and to wear something or be something that started with a “T.”  And to bring something for the dinner or an activity.  I had people bring 3 items: grapes, raspberries, blackberries, blueberries, strawberries, lemon curd, tortilla chips, salsa, drinks, diced tomatoes, avocados and refried beans.

Arrival
We made some name tags with T names just in case anyone wanted to change their names — Trudy, Trixie, Tad, Todd, Tanya, and Tallulah. Our guests included Thing 1 and Thing 2, Thor, a child with a Thomas Train shirt and a baseball hat and the letter “T” taped on it, and a toilet paper turban with a towel poncho. 🙂  We even had a couple of parents get in the mix — tea bags hanging from earrings and a necklace with a teal triangle. My daughter had on a tiara, tie dyed shirt and tutu…she chose Trixie. 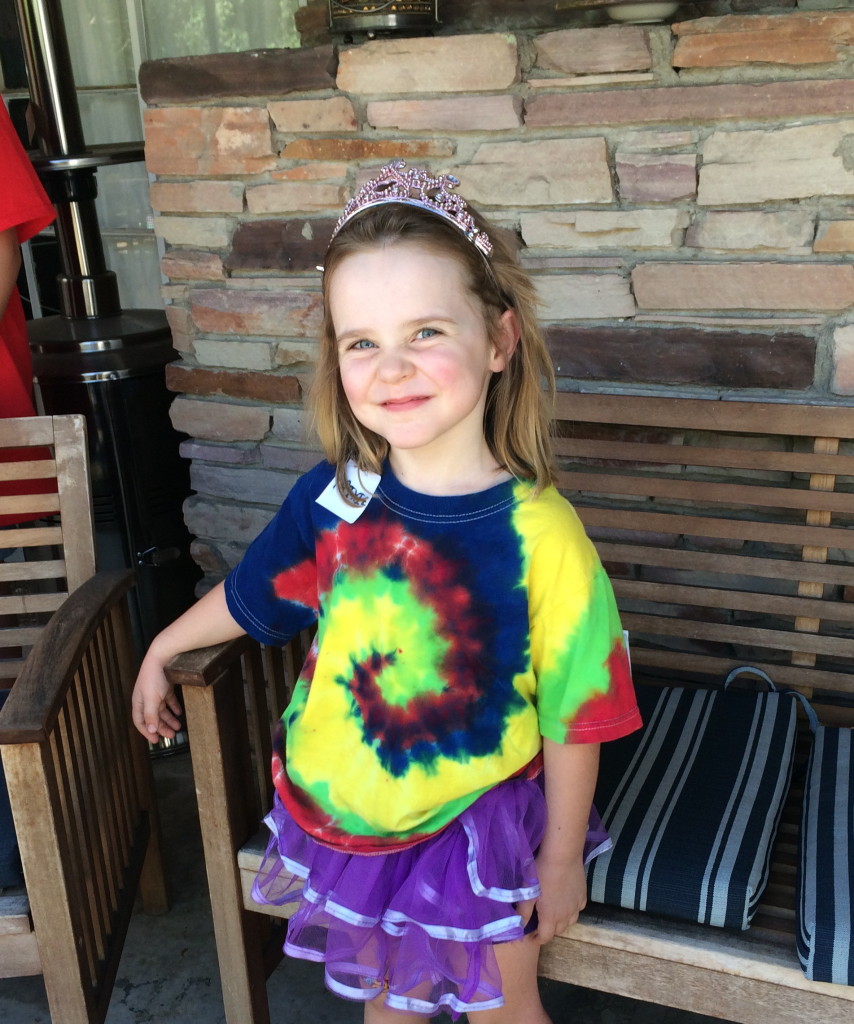 I had out some sun ice tea that we had made the day before and Tim Tams.  If you’ve never had Tim Tams, you are missing out!  They are a delicious cookie from Australia.  Pepperidge Farms makes them here in the U.S., but they’re not quite as delicious. Probably because the chocolate is different.  But, they’re still yummy.  Looks like Amazon sells the Arnott’s Australian version, maybe? I just bought the Pepperidge Farm ones at Target.

(Side note: The best way to eat them is to bit a corner off of opposite sides and use it like a straw to suck milk or coffee through the cookie.  So good. I want some now!) 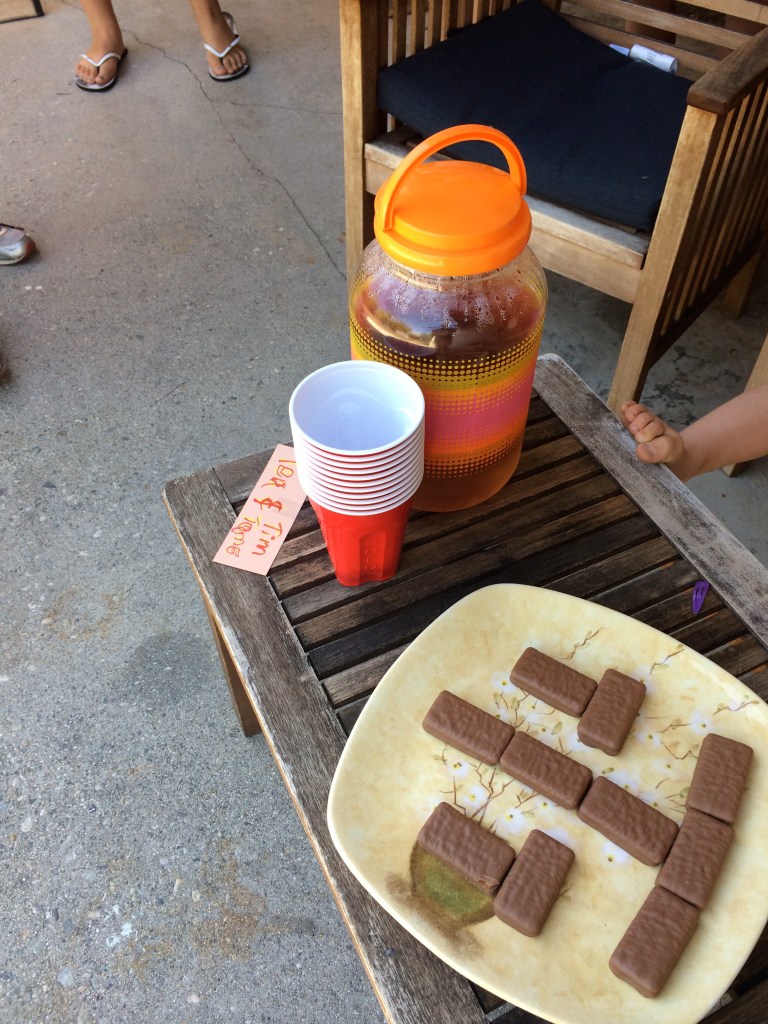 I set out toothpicks, grapes, marshmallows, spaghetti and raisins.  I said build the tallest tower you can. That’s all.  We are a kosher family, so there were only large kosher marshmallows, but, as you can see, they led to some unique towers. 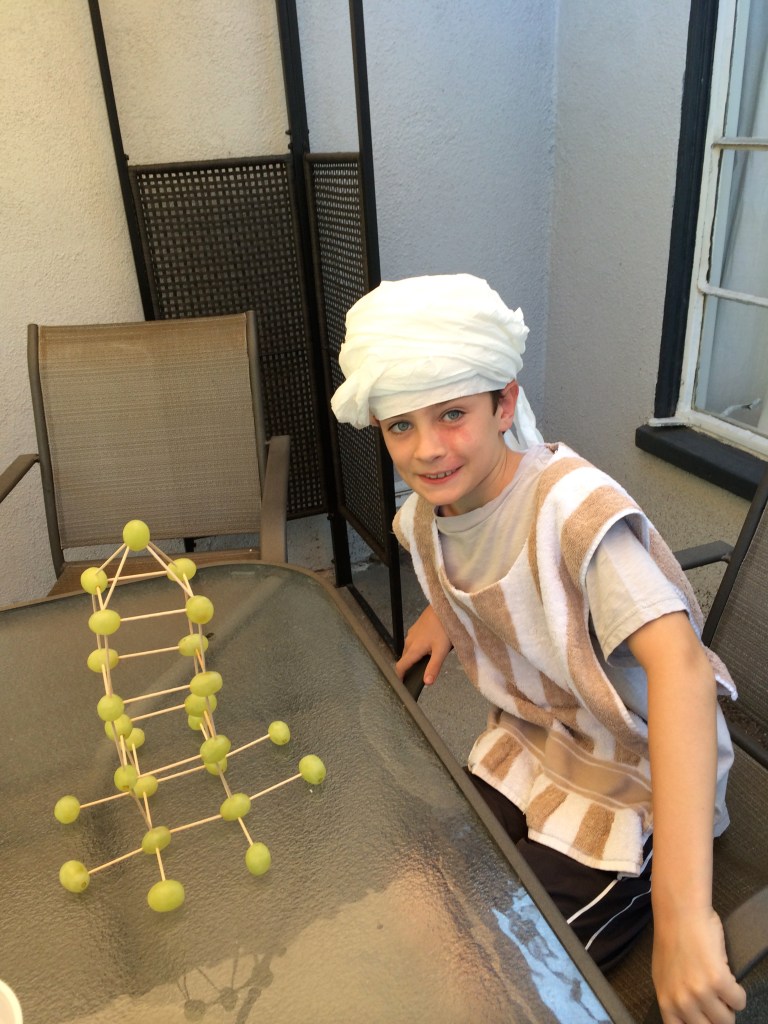 I knew they wouldn’t all finish at once, so I set up an area to toss bean bags (which I made out of zip lock bags and beans —  note to self, glue them shut 😉 ).  I used a ladder and put different scores on each rung and the kids tossed bags until everyone finished their towers. 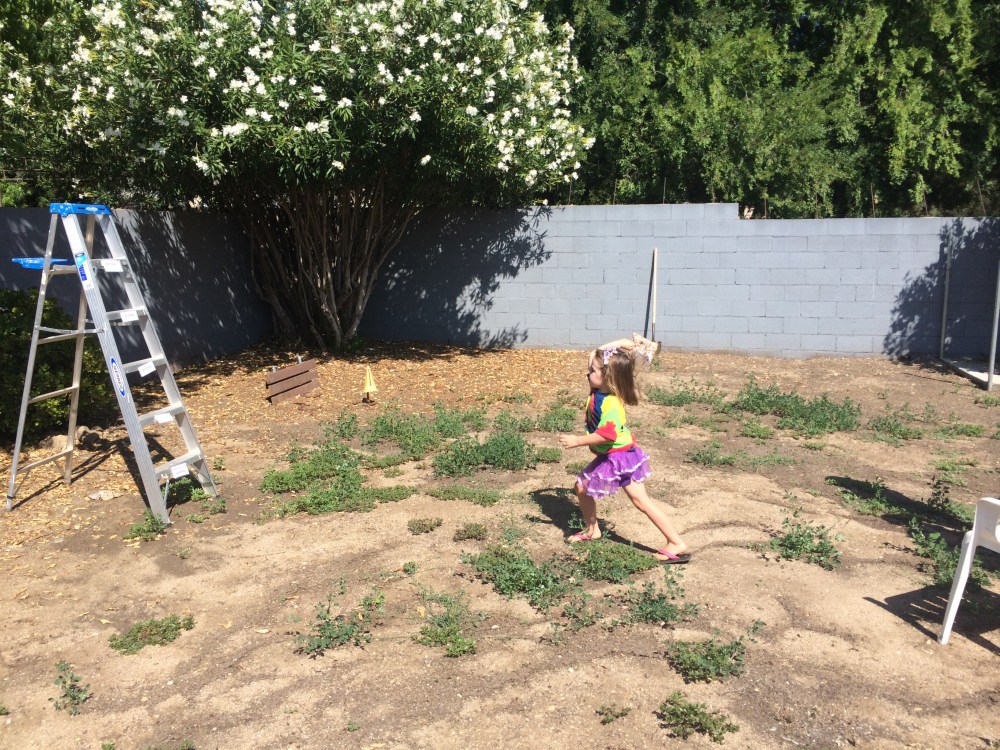 I put them in 3 groups of 3.  I used the generic clues for an outdoor treasure hunt at this link and chose the ones that worked for us.  I had printed and laminated them and put them out that morning.  On the back, but a letter and number that matches the clues.  For example, team A finds all the clues with an A on the back, in order, etc.  If they find a clue that does not have an A, then that is not their clue. (Don’t use hose and faucet in separate groups.  That’ll just mess them up.) Then after their last clue have a baggie with the corresponding group letter and have Tootsie Pops in them.

This would’ve been awesome, if I’d done it right.  I saw this idea to freeze t-shirts and then have kids race to defrost them and put them on.  It was a really hot day, so I planned for them to do this to help keep them cool.  Unfortunately, nothing I read told me how much wringing out I should do. So, I did very little.  BIG MISTAKE!  The t-shirts were so frozen, there was no way there were going to defrost anytime soon.  So, wet a t-shirt, then wring it out a lot, then put it in a bag and then freeze it. That should work much better. They all got an A for effort though.  They were trying very hard to defrost them.  Other, note, have a blanket out so they don’t get too filthy if the kids think that dropping them on the ground is going to help.  I had to explain that they weren’t actually ice. 🙂  We left them out for a couple hours and they still hadn’t defrosted.  It was a good opportunity to show that planning and failing was fine. 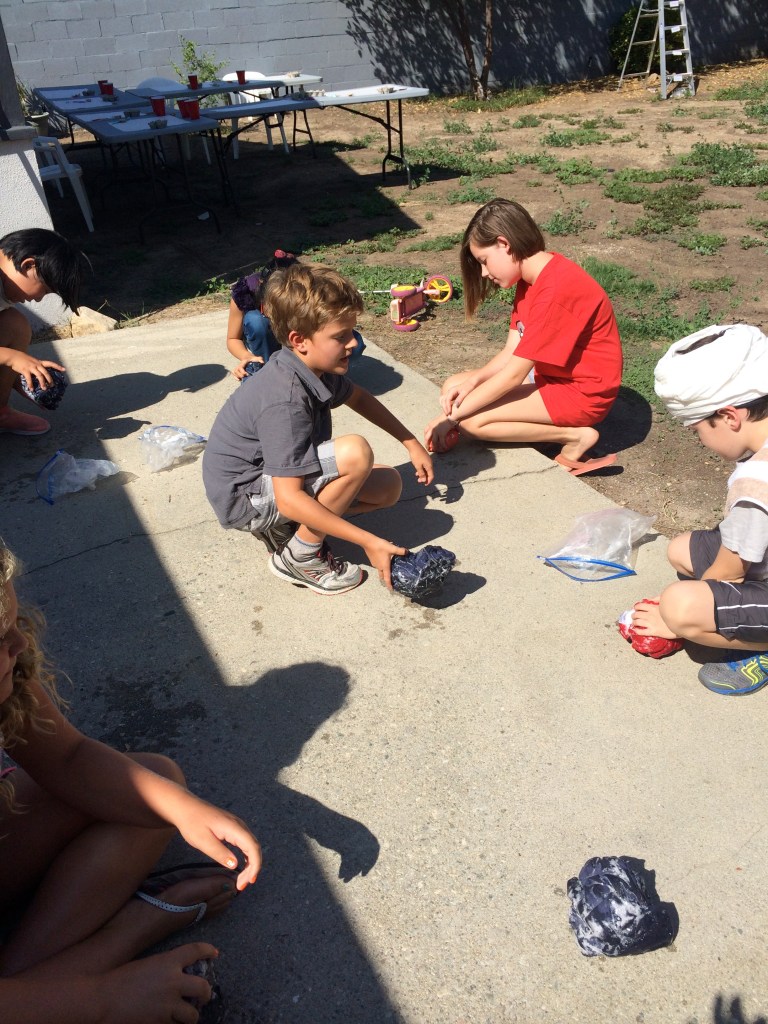 I had paper out for each child.  I used half egg cartons and put paint in them as they came up.  They each had a toothbrush, tea bag and tee for painting with.  I think they had a lot of fun with this. 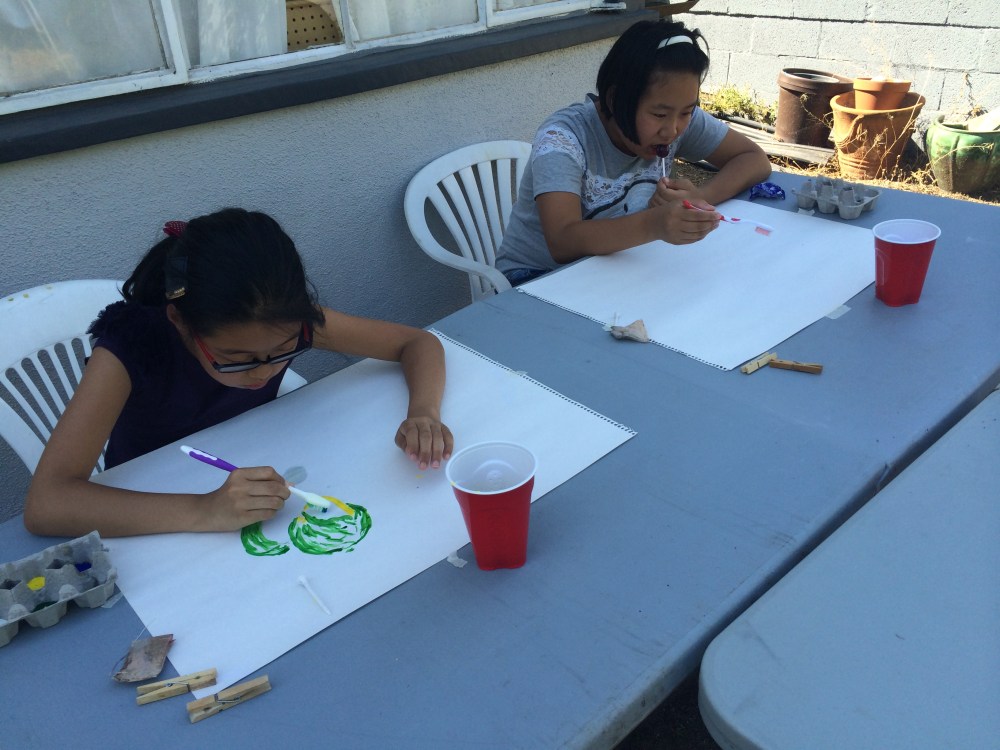 So for this activity, I gave them each a roll of toilet paper and told them to TP the front.  (I also did tell them they’d have to clean it, so they wouldn’t be disappointed later. ;p )

After they finished, I had them go get their art and put it up outside so that the dads who were all coming after work could come to a fully decorated house. 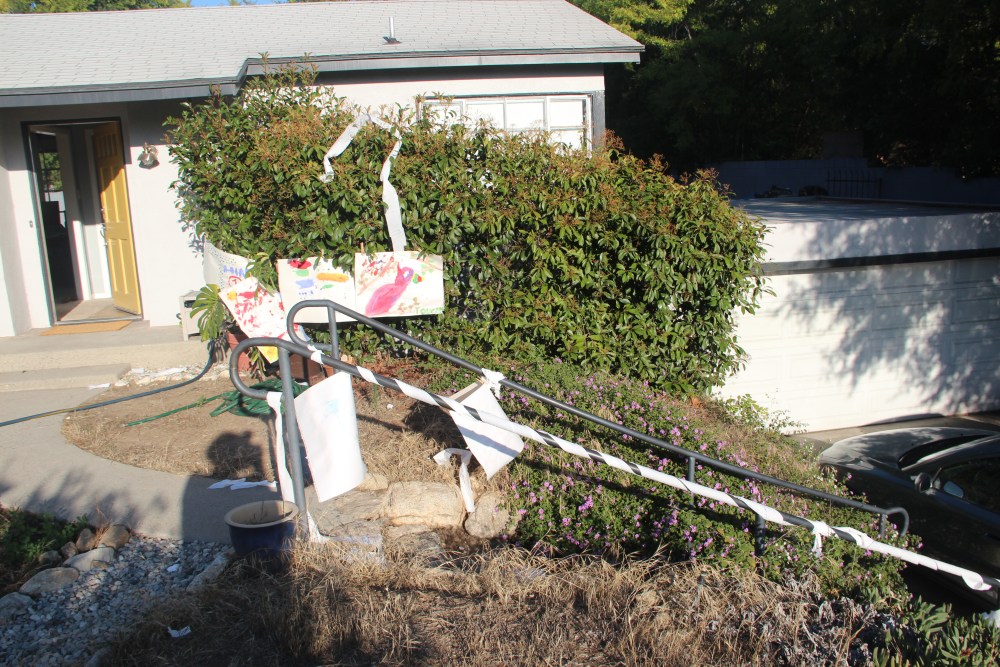 I had water balloons and told them to tag each other.  I had done 20 for 8 kids and probably could have tripled it.  I used regular balloons, and they worked fine.

Then, I had them pick up all the balloon bits, then released them to play while we got dinner ready.  I’d say it took about 2 hours to complete everything.

I didn’t get any pictures of the dinner part, sigh! I got the still standing towers and put them on the serving table for decoration.  I put tulips and some of the T Lego my husband and daughter had made as decoration on the tables.

We had a Taco Bar and for dessert a Tiny Tart Buffet. Taco buffet is explanatory, I hope.  The tart buffet idea came from Rachel Ray.  Here’s what she did.  I used her technique for the shells, but just bought already made pie crust.  It worked, mainly.  I had to double the pie crust so it was thicker and some still broke.  I didn’t use caramel, but did use lemon curd.  And added yogurt and coconut whipped cream (very cold coconut milk, vanilla and cream).  It was delicious.

Here is my Pinterest board for the T Party – all the ideas I used and many more I didn’t, because I didn’t have time/energy/money for. 🙂

cardstock for invitations
ice tea
cups
Tim Tams
name tags
toothpicks (something to put them in)
all or some: grapes, marshmallows, raisins (something to put them in)
spaghetti
bean bags
ladder or bean bag toss board or even a target to toss at (Hey!! A Target!  That would’ve been even better!
points printed out for ladder (I used only T numbers – 10, 12, 20, 22, 30, 32)
print and laminate treasure hunt clues
t-shirt for each kid
gallon bag
large art paper
paint
toothbrushes
tea bags
tees
egg cartons cut in half
toilet paper roll for each child
clothespins for hanging up art
balloons

To Do Before Party

If I’d been able to do the party at 2, I would’ve had the kids do a lot of the dinner prep.

Day before: put t-shirts in freezer

Day before or day of:
set up tables for activities
fill water balloons
cook taco meat
dice tomatoes
shred cheese
chop lettuce
make guacamole
make tart shells
whip cream
print clues
print points for toss
put any T decorations you’re child has made in the guest bathroom (especially if they make a toilet out of Lego, like mine did — well, my husband did it, but I’m sure she helped.) 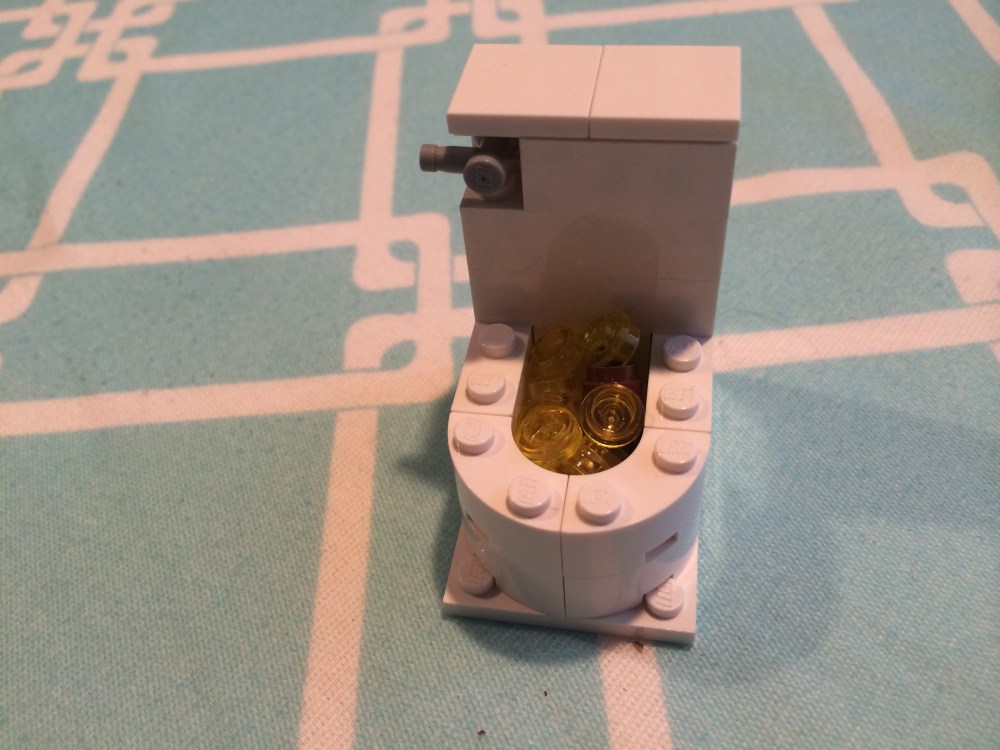